"I can sit down with any professor at any time"

We spoke to PhD student Dylan Rausch about what drew him to CBMR through the Bioscience PhD Programme, what the Center has to offer, and how the Center supports his scientific ambitions.

Dylan Rausch is entering his fourth and final year of his PhD at CBMR, supported by the Bioscience PhD Programme. Originally from the US and with research experience as a Research Assistant at both the University of Sydney and the University of Connecticut, he now works in CBMR’s Pers Group, which investigates molecular processes driving susceptibility to obesity and type 2 diabetes.

He explains that he learned about the opportunity to join CBMR through the Bioscience PhD Programme from Associate Professor Tune H Pers, whom Dylan reached out to after seeing him give a presentation.

“I was talking to my partner back in the States and she wanted to move abroad and we decided let’s just apply, let’s see what happens. I came for the interview and everything clicked. I had conversations with professors that I didn’t think I would get to have with professors back in the US when I was interviewing for PhD programs. I really felt welcomed and I felt there was a lot of room to grow here.”

What were some of your first impressions of CBMR?

“I really didn’t want to do a six or seven-year PhD like you do in the states but I still wanted the experience of doing a PhD with a group of people and I wanted to do a PhD where I had options – I didn’t want to have to decide specifically which lab I was going to join right from the start.”

“Coming from a different country, it was also important to be going through the programme with these other PhD students. I don’t know anyone here and don’t have a support system. But when you have a group of 15 other students who are also all coming from different countries and don’t have that support system it makes it, you don’t feel so alone. It clicked with other students in the program. And then I found the lab I wanted to be in and it just took right off.”

You’ve worked in a number of different places, so what are some of the strengths here at CBMR?

“I think the strengths of the Center are borne out of the Danish culture and borne out of the idea that we all bring something to the table and we all need to respect what one another brings to the table. And that plays out in a flat hierarchy. I feel like I can sit down with any professor at any time if I reach out to them and they will have a conversation with me and they will listen to my ideas. I just felt like there was a lot of space for growth, whereas I felt at these other places that I had been at it was a fight to get your voice heard, whereas here it felt more open. People were willing to listen."

"In terms of the facilities, coming from the US you sort of imagine, “everything amazing is here, why would I go anywhere else?” But I showed up here and we work in one of the most beautiful buildings that I’ve had the opportunity of being in my entire life. We have any sort of tool, any piece of machinery you want is here."

"I was sort of biased by this America-centric perspective that you can only do good work there, you only have access there. But then you leave and find out that’s not actually true. We have all these things here – we do cryo-EM, we do single cell RNA sequencing – all types of single cell techniques. I think there were more opportunities than I ever could have expected."

After three years at CBMR, how do you feel that you have grown?

"I think I’ve grown in more ways than I expected. I think I’ve grown not just as a scientist, I’ve grown as a person. There were so many challenges I faced along the way – in any sort of PhD program you are going to face challenges that are not strictly science. But going somewhere that is so international and having to learn how to communicate across cultures and how different people in the world think, that’s not an experience I would have been able to have anywhere else. That’s something I really appreciated."

I think I’ve grown as a scientist in terms of the way I think about problems. The way people think about science is quite different in Denmark and Europe to the way people think about science in North America or the US and I really appreciate being able to have this perspective and be able to integrate that with my previous experience and I think that makes me a stronger scientist overall. I also think that living somewhere new where you don’t have the creature comforts from the place you grew up in, you have to find out what’s really important to you. So at a personal level I’ve found out what really matters to me by leaving everything behind.

"What are you going to take with you from CBMR?

"What I’m going to take from here at CBMR is not only the technical skills that I’ve learned and built on, but also an expansive network all across Europe that has opened up new possibilities that I had never expected to have previously. Be it going into industry or be it doing a postdoc in the UK where I’ve had the opportunity to meet professors I wouldn’t have had chances to meet in the US, or be it go back to the US but maintain these collaborations with these researchers that are doing things that are quite impressive that I never would have been able to see had I not been here."

The Bioscience PhD Programme is an initiative by the Novo Nordisk Foundation. Applications to start in the autumn of 2021 are now open, and close on January 12, 2021.

Find out more by visiting cphbiosciencephd.org 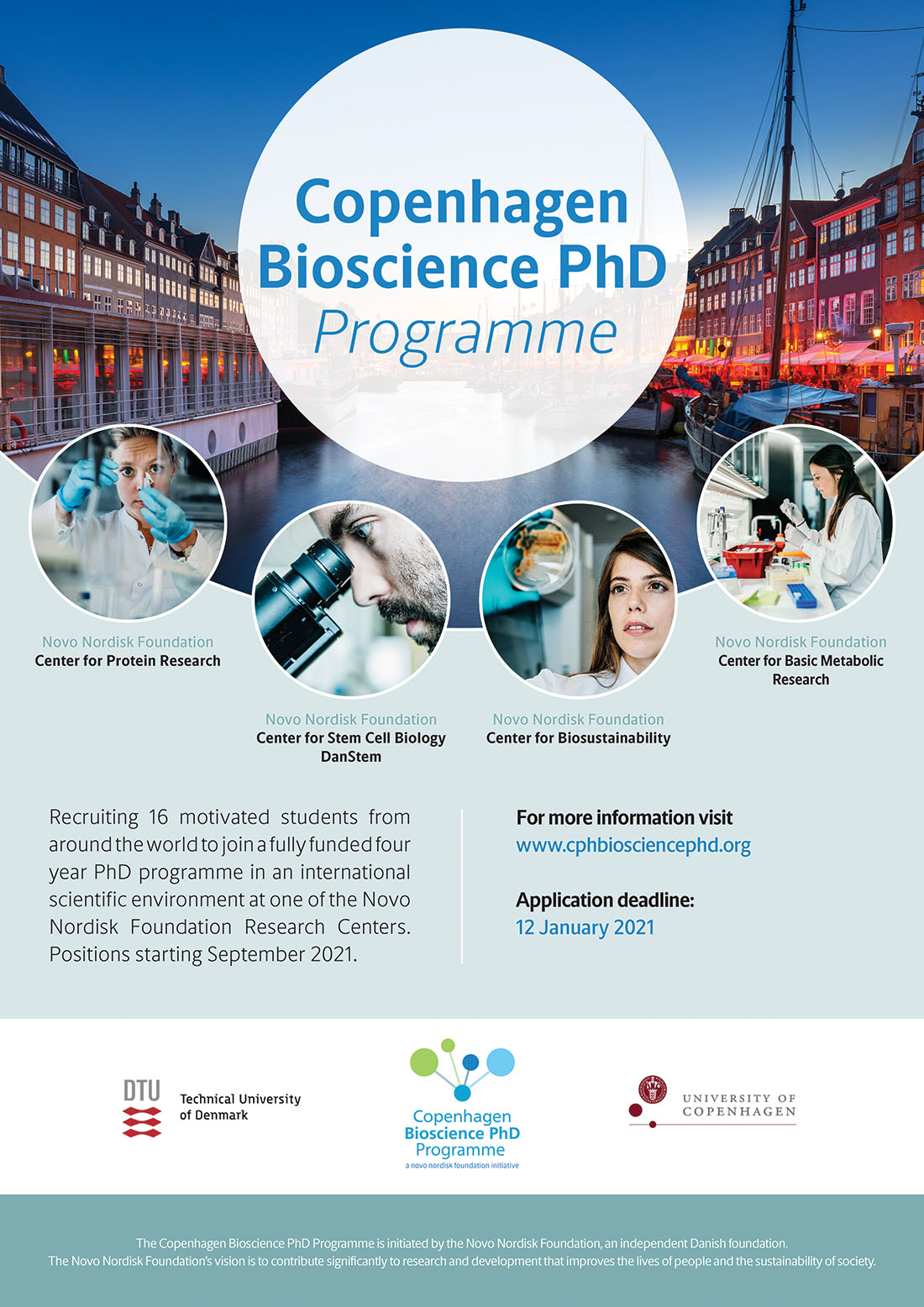