The molecule NAD+ is vital for life in all living organisms, and it is generated from Vitamin B3. NAD+ plays a central role in metabolism, cell survival and DNA repair. Scientists at the University of Copenhagen wanted to better understand the impact of reducing levels of NAD+ on the development of skeletal muscle cells. In an article in Molecular Metabolism, they show that limiting the levels of NAD+ in skeletal muscle of mice has a major negative impact on mouse development and significantly shortens their lifespan.

“Our findings clearly show how important it is for skeletal muscle to maintain adequate levels of NAD+. Not only does low NAD+ levels reduce the ability of cells to respire, it also decreases the integrity of the plasma membrane, which we know is an important barrier for extracellular calcium ions. The combination of these ‘insults’ leads to necrosis of muscle cells, reduced muscle function and eventually premature death,” says Associate Professor Jonas Treebak from the Novo Nordisk Foundation Center for Basic Metabolic Research (CBMR) at the University of Copenhagen. 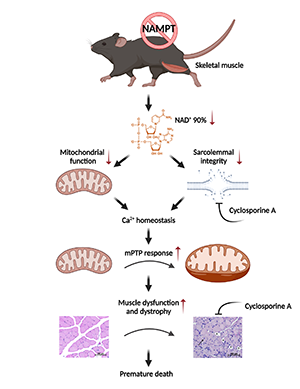 NAD+ is an important molecule with plenty still to understand

NAD+ is required for all cells to convert carbohydrates, fat and protein to energy that can be used to fuel many of the cell’s processes. But NAD+ is continuously degraded to nicotinamide, which is a member of the Vitamin B3 family. However, the cell is able to regenerate NAD+ from nicotinamide with the help of the enzyme NAMPT, which is the main pathway that skeletal muscle cells use to maintain NAD+ levels.

Although scientists have already discovered that without NAMPT, NAD+ levels in cells will drop rapidly, they still want to obtain a greater understanding of how NAD+ deficiencies affect the metabolism of different tissues in the body. In particular, questions remain about the role of NAMPT and NAD+ in skeletal muscle.

To answer these questions scientists at the University of Copenhagen generated a transgenic mouse that does not produce NAMPT in its skeletal muscle. These mice retained only 10% of NAD+ in their muscle, which limited their ability to grow muscle and ultimately caused them to live very short lives.

They carried out further experiments to understand why the low levels of NAD+ had such a significant impact on shortening the mice’s lifespan. “We discovered that muscle cells without NAMPT were less able to control the concentration of calcium ions, leading the mitochondria to swell and collapse. Mitochondria produce energy for the cells, and without functioning mitochondria, they struggle to survive,” says Senior Scientist Astrid Basse.

Calcium ions flow into the mitochondria through specific pores in its surface membrane. In mice without NAMPT, the pores allowed more calcium ions to flow through into the mitochondria, which caused the swelling. Giving these mice a chemical inhibitor of the pore, Cyclosporin A, increased the lifespan of the mice and the quality of their muscles, despite having low NAD+ levels.

“Our findings provide insight on what happens when you have an insufficient supply of NAD+ and how it has fatal consequences for skeletal muscle development and function. This knowledge may provide indications for conditions and diseases where Vitamin B3 supplementation can be beneficial,” says Senior Scientist Marianne Agerholm. 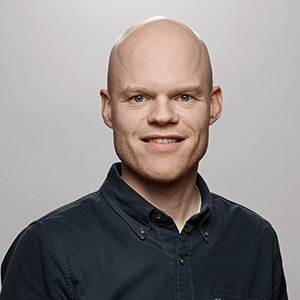