The receptor responsible for activating the energy-burning property of brown fat in humans has been identified. The next step is to investigate drugs that fit the receptor and trigger the response as a means to treat obesity and type-2 diabetes. The discovery is the result of an international collaboration, including scientists at the University of Copenhagen and Université de Sherbrooke, who published their findings in Cell Metabolism.

An international research team have discovered how to activate brown fat in humans, which may lead to new treatments for type 2 diabetes and obesity. The results of the collaboration between the Centre de recherche du Centre hospitalier universitaire de Sherbrooke (CRCHUS) and the Novo Nordisk Foundation Center for Basic Metabolic Research (CBMR) at the University of Copenhagen were published in Cell Metabolism. 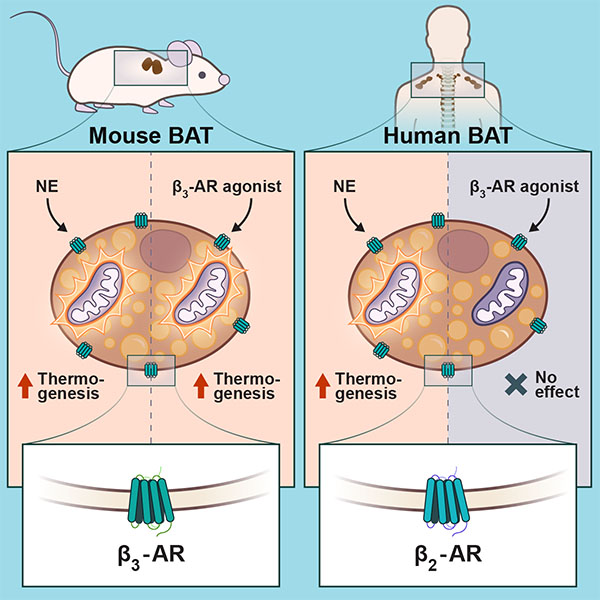 Brown fat burns energy and generates heat – a process called thermogenesis – after being activated by cold temperature or chemical signals. Humans have small deposits of brown fat, and scientists have long hypothesized that finding alternative ways to pharmacologically activate the fat could help improve metabolism.

Scientists have now discovered that beta2-adrenergic receptors (b2-AR) in brown fat cells are responsible for stimulating thermogenesis. According to Dr. Denis Blondin from CRCHUS, the finding could explain why most clinical trials, which have attempted to induce BAT to burn energy, have performed poorly.

“We show that perhaps we were aiming for the wrong target all along. In contrast to rodents, human BAT is activated through the stimulation of the beta2-adrenergic receptor, the same receptor responsible for the release of fat from our white adipose tissue.”

A step toward unlocking the potential of brown fat

According to Associate Professor Camilla Schéele at CBMR, this finding has clear therapeutic applications.

“Activation of brown fat burns calories, improves insulin sensitivity and even affects appetite regulation. Our data reveals a previously unknown key to unlocking these functions in humans, which would potentially be of great gain for people living with obesity or type 2 diabetes”.

A second phase of research will begin in the autumn, which will attempt to validate the finding by activating brown fat with drugs that target b2-AR, explains Professor André Carpentier from CRCHUS:

“Our next step will be to use a drug that specifically activate that target on brown fat and determine how much it could be of use to burn fat and calories in humans. Once this is done, studies in patients with type 2 diabetes will start to determine if this approach can be useful to improve the metabolic control of the disease.”

The international team of scientists responsible for the discovery also include researchers from Leiden University (Netherlands), the Centre for Physical Activity Research at Rigshospitalet (Denmark), the University of Ottawa (Canada), Université Laval (Canada) and Université de Sherbrooke (Canada).