From CBMR to Intomics: Julia Villarroel

Where are they now?

Julia Villarroel is a bioinformatics scientist at Intomics, a Danish company that uses insights from big biomedical data to help pharmaceutical companies develop new drugs. She joined Intomics in April, after almost three years as a postdoctoral researcher in the Barrès Group at the Novo Nordisk Foundation Center for Basic Metabolic Research (CBMR) at the University of Copenhagen. We caught up with Julia a few weeks into her new role to learn more about her career to date. 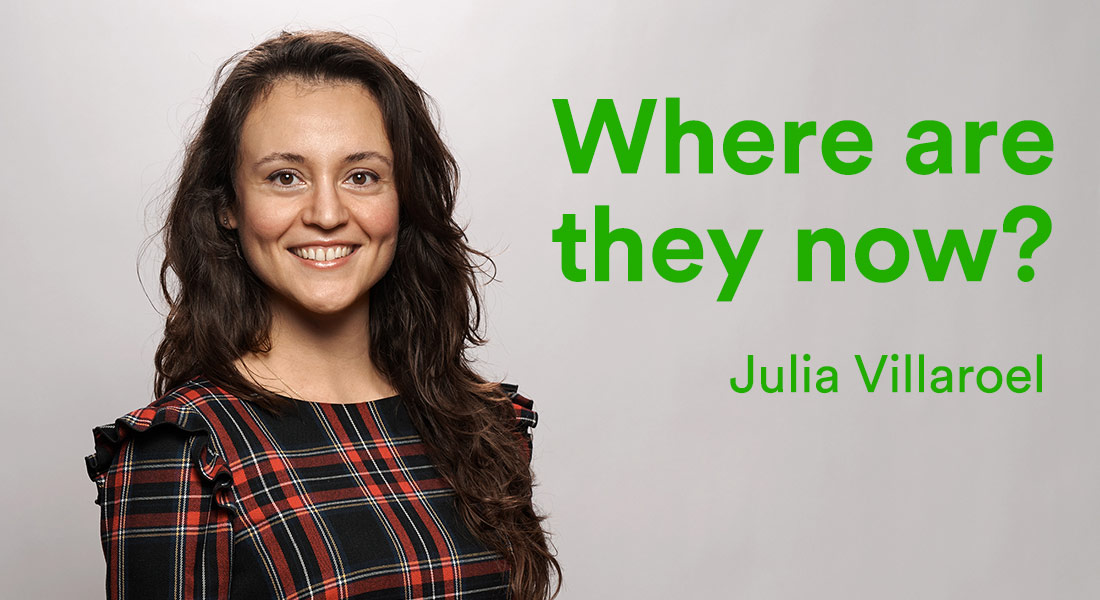 Why did you become a scientist?

I’ve always been interested in biology, mathematics and physics, how the human body works, and how it’s affected by the habits we might have, from food to exercise to sleep.

It is a combination of biology and informatics that uses computing power to capture biological insights from big biomedical data. Today, we have access to a lot of so-called big data, such as sequences of human DNA, and we have the tools to go in and get information from some of this data about biological impact.

What’s a good example of that?

Take fat tissue in people who are either obese or lean. We can go in and try to see what the difference is in the so-called expression data – how differently the tissue works in lean people compared to obese people. Then we can try to understand the biology of this difference in order to see whether we can address it with some measures or target it. So it’s about capturing the meaning of the data — finding data and trying to make some sense out of it.

Can you summarise your career to date?

I got my bachelor’s degree in biotechnology at the University of Turin in 2011 and came to Denmark for a master’s in systems biology at the Technical University of Denmark. I then did my PhD at DTU, where I focused on bacteriophages, which are viruses that infect bacteria. My interest was in studying them as a potential alternative to antibiotics to cure infectious diseases, in light of increasing antibiotic resistance.

You joined CBMR in 2018. What was your field of research?

The effect of exercise on the human microbiome. The microbiome comprises all the bacteria in our body. Usually there’s a big mass of microbiota on surfaces that contact the external environment. But lately it’s been observed that there are also bacterial fragments in tissues that were considered sterile. I looked at the blood and muscles of eight participants undergoing a training session where they cycled five days a week, for six weeks. The question was whether the bacterial pattern changed in either their blood or their muscles.

What was the answer?

We didn't find any difference in their blood, but we did in their muscles. Specifically, fragments of two bacteria — staphylococcus aureus and acinetobacter. The next question was, what’s their function? It's just speculation, of course, but perhaps it’s to aid metabolism locally and produce compounds that aid energy production at the muscular level.

How do they get there?

Likely through the intestine. We usually have increasing permeability through our intestine if we just exercise at a moderate level. We see an increase in intestinal permeability that allows bacteria to enter the bloodstream and reach peripheral tissues.

How does CBMR differ from other research centres?

I can only compare it with my PhD experience, but there was a lot of interaction at CBMR, which was great. We were a team of biologists and bioinformaticians in continuous dialogue with one another. It was also so international and there was broad expertise. It was an open environment, too, in which we felt secure and able to ask questions. The fact that there was openness, in that sense, allowed space for creativity and more original ideas.

What do you do at Intomics?

We have large pharmaceutical companies as clients, and we analyse their data. I'll be trying to answer questions that are about understanding the biology of different diseases. I’m also working on finding disease biomarkers. A biomarker is a molecule that you can detect in your blood and is an indicator of, say, cancer.

What are the big unknowns of your field that you’re hoping to contribute to?

I think the core biology of diseases, understanding what triggers them and how we can prevent them, and whether we can do so naturally, not just by giving people drugs. That’s something that interests me –      really understanding the problem so you can prevent it, rather than fix it.

Lastly, has your research influenced how you live your own life?

Definitely, by getting to know how exercise or diet improves your metabolism.

Is there a good example of that?

Exercising in the evening. Exercise performance is highest in the early evening. Furthermore, If you have an exercise bout just before your meal, say a brisk walk to fetch your food, you increase your metabolism, and your body extracts more nutrients from your meal.

As an Italian in Denmark, do you eat dinner at five o'clock or at five to midnight?