An exceptional receptor on the surface of brown fat cells drives calorie-burning without the need for an external signaling molecule. Mice genetically engineered to overproduce this receptor, GPR3, in brown fat were completely protected from metabolic disease despite being continuously fed a high caloric diet. The scientists behind this discovery at the University of Copenhagen believe their findings upend the current dogma describing how cell surface receptors work, while opening the door to new approaches for treating obesity.

Cells receive messages from their surroundings using receptors located on their surfaces. These messages are molecules – or ligands – that physically bind to the receptors, This messaging system is responsible for an enormous variety of cell functions and behaviors and is the most common target for therapeutic drugs.

A small subset of receptors appear to function without requiring a ligand, but it is not understood how these receptors function and, most critically, which biological role they play. Now, scientists at the University of Copenhagen have discovered that one such receptor, GPR3, has a ‘built-in’ ligand and does not need any external ligand in order to work.

The researchers made this finding while searching for a new way to stimulate brown fat’s unparalleled ability to take up and burn glucose and lipids from the bloodstream. They found that cues from within brown fat cells increased the levels of GPR3 receptors on the cell surface that resulted in continuous calorie-burning. These discoveries, which were published in the journal Cell, suggest that fat cells may have more control over their own trajectory than was previously understood, while also presenting a promising new approach to treating obesity.

“Given the global obesity crisis, a great deal of effort is being put into identifying novel ways to safely exploit the calorie-burning power of brown fat. Identifying a unique candidate like GPR3, with such untapped therapeutic potential for metabolic disease, is exciting in and of itself. But uncovering a new paradigm of receptor control in the process takes it to another level for us,” says Associate Professor Zach Gerhart-Hines from the Novo Nordisk Foundation Center for Basic Metabolic Research (CBMR) at the University of Copenhagen.

Safely unlocking brown fat calorie-burning has been a key hurdle

Brown fat’s profound calorie-burning ability makes it an appealing therapeutic target for metabolic diseases. This beneficial function of brown fat is naturally activated when mice and humans are exposed to cold temperatures. However, scientists have struggled to safely mimic this effect with drugs.

The cell surface receptors classically known to stimulate brown fat activity are the beta-adrenergic – or ‘fight or flight’ – receptors. While activation of these receptors can increase brown fat calorie-burning in humans, it also results in serious side effects, including increased heart rate and blood pressure. 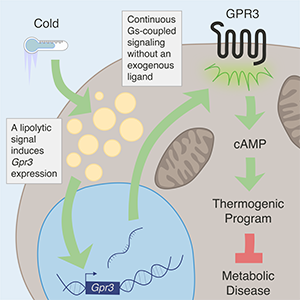 The CBMR scientists went back to the drawing board to find a way to activate brown fat in the same, safe, way as cold exposure. They exposed mice to the cold, screened their cell surface receptors, and found that cold exposure dramatically increased the production of GPR3 receptors. They further discovered that the fat cells themselves were responsible for sending an internal molecular signal that triggered the profound production of GPR3 receptors.

The scientists went on to genetically engineer mice with elevated levels of GPR3 receptors in their brown fat cells. They found that these mice were resistant to developing obesity, despite being fed a high caloric diet. Compared to control animals, they burned more energy, gained less fat tissue, and were better able to control their blood glucose levels. Even more remarkably, increasing the number of GPR3 receptors in brown fat cells counteracted metabolic disease in older mice that already had developed obesity.

“By using genetic tools to increase GPR3 levels in obese mice, we could begin reversing weight gain and completely correct glucose control. GPR3 activated the brown fat cells to essentially act as a sink for carbohydrates and lipids from the blood,” says PhD Student Olivia Sveidahl Johansen, the first author.

A safer alternative to activate the health benefits of brown fat cells?

The findings suggest that increasing the production of GPR3 in human brown and white fat cells can boost calorie-burning. Current drugs, which exploit cell surface receptors like GPR3, largely act by mimicking the natural signaling molecule or ligand. This approach typically requires a patient to take the medication continually in order to maintain receptor activation.

GPR3, on the other hand, has an ‘built-in’ ligand, which keeps it constantly active. This opens up new therapeutic possibilities, such as gene therapy, as an alternative approach to treating obesity.

To explore this idea, the authors teamed up with collaborators at the University of Bonn and ETH Zurich to engineer viruses that could selectively increase the production of GPR3 in brown fat cells of mice. They found that a single administration of this virus significantly boosted the calorie-burning of the animals for over a month.

“With the help of our extraordinary collaborative team within Denmark and abroad, we will continue to explore potential strategies of therapeutically exploiting the unique activity of GPR3, specifically in the context of fat tissue and metabolic disease. However, from an even broader perspective, we hope that this work will inspire future investigations that branch out into the control of GPR3 and related receptors in other tissues throughout the body and the application to other disease states,” says Associate Professor Gerhart-Hines.

The primary funding for the project came from the European Research Council, the Independent Research Fund of Denmark, and the Novo Nordisk Foundation. The work involved several Danish universities, hospitals, and University of Copenhagen spinout, Embark Biotech ApS as well as numerous international collaborations with universities from Sweden, Germany, Austria, Switzerland, the Netherlands, the UK, and the United States. 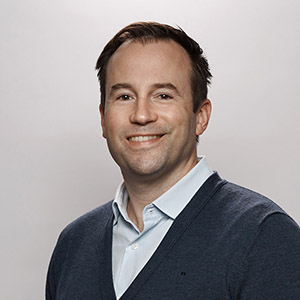