“Obesity is highly stigmatized, but our research can show that it isn’t a choice”

Sophia Metz is a German PhD Student at CBMR. Having previously studied in Cologne, Cambridge, Berlin and Maastricht, she joined Tuomas Kilpeläinen’s group as a research assistant in 2018. Sophia is investigating the genetic underpinnings of obesity and its metabolic complications by applying methods of genetic epidemiology in combination with laboratory work. 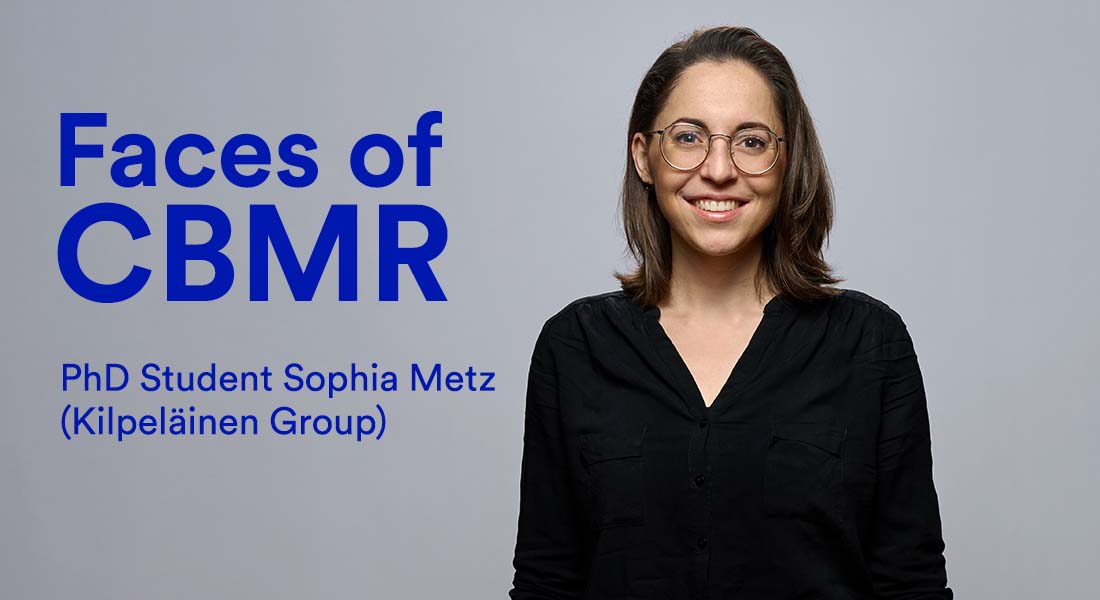 I’ve always loved crime stories — books, films, anything to do with crime — and the thing that interested me most was forensics. Forensic biology and forensic genetics. When I was 16, I wanted to become a forensic geneticist but it didn’t turn out like that.

Yes, how did you end up swapping CSI for CBMR?

I contacted some forensic scientists in Germany to ask what I should study to follow their path. They said I should study biology, so I did my bachelor’s degree in biology at the University in Cologne. For my thesis in basic science, I studied a worm called C. elegans. It was fun, but I realized I wanted to do something more relatable to humans. I did my master’s in biomedical sciences and human nutrition at Maastricht University and my thesis at the German Institute of Human Nutrition in Berlin. I worked on a clinical trial, doing ECGs, blood tests and nutritional counseling. It was a lot of fun, but at the same time, I knew I wanted to do something with humans without really interacting with the human body itself. My supervisor in Berlin suggested I apply to CBMR for my PhD, which I am now doing in the Kilpeläinen Group.

You got to experience “problem-based learning” at Maastricht University. What did you make of it?

It fits my way of thinking better than the German approach, which is about knowledge-based learning. With knowledge-based learning, you have to memorize knowledge about a topic and apply it to a problem. At Dutch universities, you get the problem first without having the knowledge and you have to find out what information you need to know. Starting with the problem suits my brain and my way of learning better because I’m not a book learner. I need to write things down and I need some applicability. I also think it’s a more scientific way of approaching a problem because, in science, you’re always trying to find something outside the knowledge you have. So I think problem-based learning is a better way to develop into a critical thinking scientist.

Do you still apply that approach to your work?

I do. Getting into that workflow helps me, like creating mind maps. I use it to phrase research questions and approach projects from a new angle. It doesn't need to be a big research question, it can be a small problem, but I still use it.

Tell us about your research at CBMR.

When I applied to CBMR, I wanted to work on obesity, not by exploring a small group of people, but by getting the big picture. My research is basically a mix of bioinformatics and laboratory work. We have many big databases available today, from human clinical trials to population-based studies, and by looking at the genetic makeup of people who become obese and those who don’t, we can maybe decipher or unravel the complexity of obesity and its co-morbidities. So I’m trying to use this flood of data to prove that what we predict is happening is actually happening. I’m interested not only in biomarkers or blood markers, like glucose levels but in people’s genomic backgrounds. That’s the focus of my PhD — how does our genetic makeup determine our risk of becoming obese and developing certain diseases associated with obesity?

Why is your research important?

In our society, obesity is highly stigmatized, but our research can show that it isn’t a choice. It's not just because people are greedy and unable to resist a piece of chocolate. One’s genetic makeup can affect and determine obesity. So the main aim of our research is to de-stigmatize obesity and find out why society is getting more obese. It’s not only about saying “eat less, do more physical activity”, but about looking into specific underlying causes. People’s genetic makeup plays a role and, by knowing your genetic makeup, we may be able to personalize long-term treatment and prevention options for obesity.

How does CBMR differ from other research centers?

It’s more open and collaborative — and that's something I particularly enjoy in my field. I do both bioinformatics and wet lab work, where you need to collaborate with experts in both fields. CBMR’s open office spaces really enhance and facilitate new research and inspire new projects and research ideas because you get to talk to people and discuss your findings and problems.

You’re in the final year of your PhD. What will your next step be?

I don’t have a stiff career plan. I’m very open to exploring options other than academia. But generally speaking, I want to work in a team of scientists and I want to be involved in scientific research questions and explore the unknown.

Finally, tell us about your role in the Medical Museion’s exhibition The World Is in You.

I was asked to play a scientist in a short film about circadian rhythms. I thought, why not? It's fun. What I particularly like about it is, as a scientist, you see the world in a certain way and everyone around you sees it the same way, because you're all scientists. Artists do see the same thing, but interpret it completely differently. It was fascinating to see how other people approached science and the idea of research. That’s something else that’s special about CBMR — that we get to work with artists. While we’re trying to explain our surroundings and environment through science, artists are trying to do it in a more transcendent way.